At Stamplay, we’ve been working together for more than 2 years and have experimented with many methods and tools to organize work, priorities, and keep track of what we do.

After many trials we’ve come to the conclusion that, especially if you’re a small group, it’s better to avoid over-engineering processes. So we’ve adopted a very simple organizational strategy: define a group methodology and let people organize themselves at the individual level.

This may sound obvious to some, but it’s not. The temptation to micro-manage is always very high, but when you’re dealing with highly skilled and talented people this attitude can be very counterproductive. You have to define what we can call Minimum Viable Leadership (thanks Oli for the label).

In this context, it’s important that all members of the team are individually disciplined and organized, but as a team leader you don’t need to tell them how to do it or which tools to use. At the same time, the team members should acknowledge that they’re working to achieve a common objective and that there is team discipline to maintain.

I consider the Software Developer as an artisanal job; when they work in teams, developers are highly individualist. They like to approach and solve problems, they generally work with great concentration, and they follow the flow of their thoughts.

There are plenty of posts, ebooks and seminars on how to organize work and life. At Stamplay, we think that everyone’s smart enough to self-organize and create their own workflow.

We tried to share digital tools like Trello, Podio and Basecamp, but it didn’t really work. Tools like these are only useful if people decide to integrate them into their own personal workflows, forming a habit. If they don’t form this habit, they’ll always have to think that they have to use that tool. The result being that a tool that’s supposed to increase personal and team productivity becomes a distraction.

Personally, I love my Moleskine (did you know it’s an Italian product?) and my black Uniball Eye Micro pens. Then I use a blend of digital tools that include Google Spreadsheets and Docs, Wunderlist and a Pomodoro timer. I’ve also adopted the Inbox Zero strategy to deal with emails and process them in batches. I know that my cofounder Giuliano uses Evernote for almost everything. I tried using it, but I became tired of it very quickly: I need to draw and use paper and pen.

Although we often work in the same room, we generally communicate via email and Slack to keep the environment as quiet as possible. It’s rare that there are questions that require an immediate response, so the asynchronous conversations become the most effective way to exchange the information needed to proceed with the work. This choice appears very useful now that we’re moving from being a team in a single location to a team distributed across Rome and San Francisco with 9 hours of difference between the two cities. 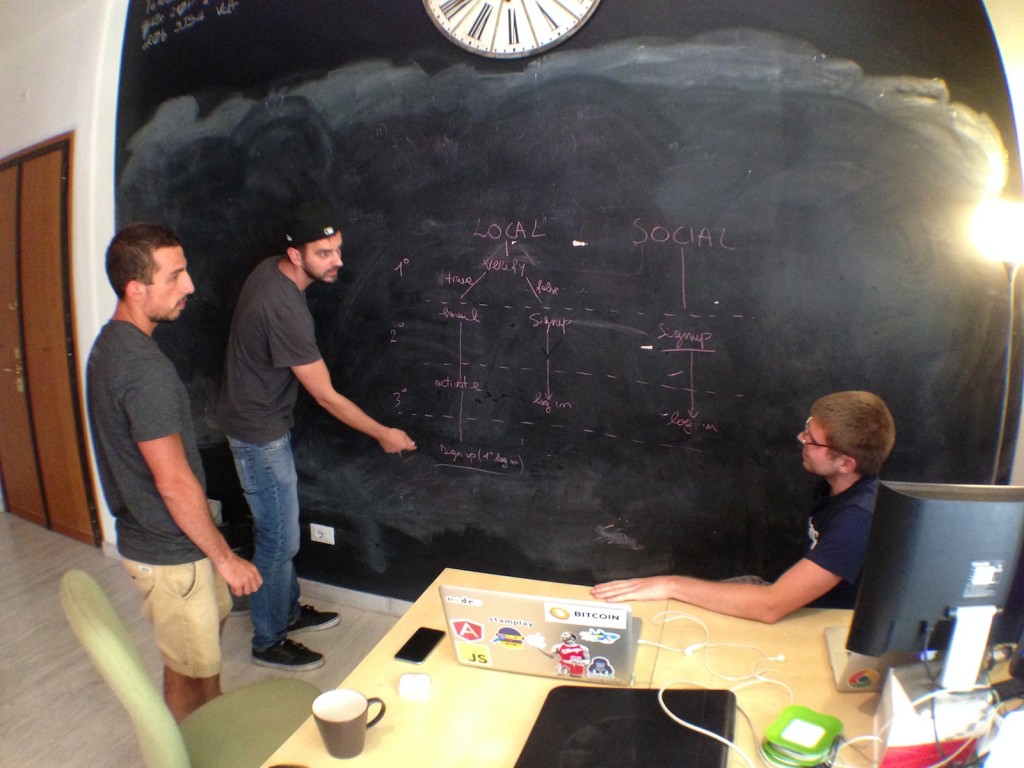 Alessandro, Cristian and Claudio from the development team in Rome

While we acknowledge the need to let people organize themselves, we also remember that we need to pursue a common goal. The main tool by which we maintain a team discipline is a whiteboard full of post-its. If you’re thinking that this is a weird way to do it, you are not considering the fact that “keeping people on the same page” is often the simplest and most effective way to encourage people to form a cohesive group able to do incredible things.

Remember that as a startup, we work with people that like challenges and a work that is not always the same every day. They don’t need to follow a process designed by others. This is not always obvious, but I believe that trying to micro-manage smart people is one of the fastest paths to failure. You need to support them, keep them aligned, and give them a sense of direction and visibility of what’s happening. You don’t need to babysit them at all. If you do, you’re wasting a lot of energy.

Often development teams use complex kanbans with many processing steps. We tried, but came to the conclusion that managing the board became too strenuous. We have also tried digital kanbans, but at the end, even if you’re a distributed team, I believe that a physical board is unbeatable. The simple act of moving post-its from a position to another along the week is very rewarding and gives a tangible perception of progress.

In our kanban, there are only individual tasks; whoever starts and activity generally completes it from beginning to end. This allows us to avoid any temptation to multi-task, because doing several things at once is the best way to make them all bad.

Originally, we only had a whiteboard for software development. But after joining 500Startups we’ve now set up another whiteboard for marketing activities, so that all the team is aware of the distribution program. Marketing is becoming more and more technical and often the engineering team is involved in setting up tools and developing scripts to automate tasks. Adopting a disciplined approach also for marketing is crucial.

This the second post in a series of thoughts about software development and productivity. I’m not a programmer, but I’ve worked with programmers for the last 20 years in a variety of roles. View the first post here.